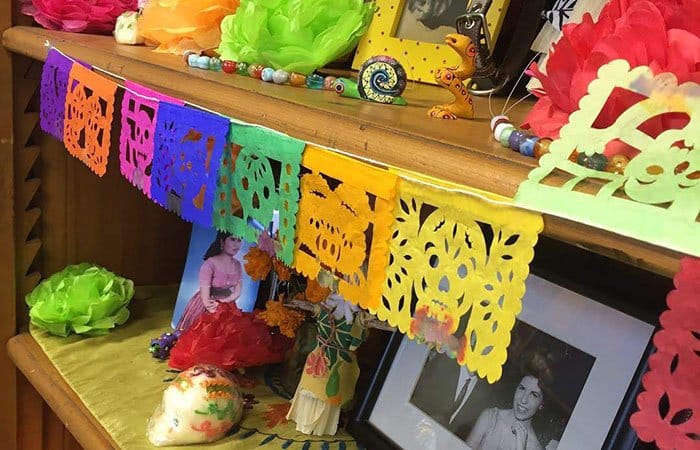 There is often a misconception that day of the dead is simply the Mexican version of Halloween. However, the two celebrations have very different histories and contemporary evolutions. Our contemporary images of Halloween are often centered on scary images and illusions to death as something to be feared. In many Latin American countries,however, Dia de Los Muertos celebrates death in a way that signifies the perpetual cycle of life, viewing death as the beginning of a new life in another realm. In fact, many spiritual traditions believe that during this time of year, in the Fall, or in the month of October, the veil between the spirit realm and the human realm is at it’s thinnest. Latinx cultures thus celebrate Dia de los Muertos as a day to commemorate this communion.

One of the ways this is done is through the creation of an altar or ofrenda. The symbolism of the ofrenda is deeply important as it creates a central space for the living and the dead to come together. Traditionally, on the altar one might place photos, food or drink items the deceased loved ones enjoyed in life, maybe even religious or spiritual symbols. One particular food item might be pan de muerto (bread of the dead), which is a sweet bread formed in the shape of bones to signify the bones of the dead. You might also see sugar skulls on the ofrenda which can symbolize the sweetness of life, and the overall celebratory spirit of the tradition. Another important element of the ofrenda would be the cempasuchil or marigold flowers. They are bright in color and strong in scent, meant to guide the spirits to the land of the living. My children’s favorite part is creating a path of marigold petals outside guiding the spirits into our home. There are many other symbols used to celebrate this tradition that I encourage anyone who wants to learn more to look into.

Dia de los Muertos originates in pre-Columbian indigenous traditions, with different variations all over what is now Latin America. During the time of European colonization, particularly when the Spanish were forcibly imposing Catholicism on the indigenous people, many of these indigenous traditions were discouraged and even violently penalized. Over centuries this colonial rule by Europeans enacted both physical and cultural genocide. In turn, as Catholicism took a stronger hold on the land, and tribal territories became European colonies, religion and cultural practices in Mexico and much of Latin America evolved into a hybrid of indigenous and European traditions. Thus we see that Dia de los Muertos is celebrated in accordance with the Catholic celebrations of All Souls Day, and All Saints Day, while others might recognize November 1st as the day to remember young children who have passed on, and November 2nd as the day to remember all other people who have passed.

Furthermore, many Latinx folks living in the U.S., specifically Mexican-American people, have been further separated from these ancestral traditions due to assimilation efforts brought on by the government sanctioned “Americanization” programs of the post Mexican-American War era. These programs included, among other things, restrictions on speaking Spanish and practicing Mexican cultural traditions.  And yet, despite this complex history of colonization and assimilation, and despite the efforts of erasure of these traditions, Dia de los Muertos remains a long-standing tradition in much of Latin America and the U.S. For Latinx folks, this celebration marks a reclamation of ancestral history, traditions, and spirituality that is often marginalized by the mainstream historical and cultural narrative. Furthermore, this celebration can take on particular importance as a means to reclaim and preserve Latinx culture in the face of the xenophobic political fervor and cultural appropriation that permeates American culture.

As a Latina with a deep understanding of this historical, political, cultural and social dynamic, and as a parent of two children, it was very important for me to find a school community that would prioritize and be supportive of cultural diversity and inclusivity. Which is why I am happy to say that Maple Village Waldorf School has provided such a space for my family. The schools embracing of Dia de los Muertos brings me comfort in knowing my children can feel represented and accepted within their educational environment, something not always afforded in other settings. The school has created a space via the Diversity Committee in collaboration with some of the faculty to integrate other cultural traditions as well, in order to extend inclusivity to students of color, and families that represent marginalized identities. I cannot say enough how much this means to me, knowing that when I was a child representation like this did not always exist. I am so happy that the school has opened its heart to such a beautiful cultural celebration that means so much to me and my family and many of the other Latinx families at Maple Village. I am also happy to see this has been done with such reverence, mindful of cultural appropriation. The school has erected an altar in the office, inviting families to bring pictures of their loved ones who have passed, along with other items such as food and flowers.

Día de los Muertos offers a beautiful opportunity for people and families to remember their loved ones who have passed on, to connect to their ancestors, and celebrate death as a passage into the spirit realm. My own father passed away five years ago, and celebrating Dia de los Muertos continues to give me a path toward healing and a space to grieve in a way that celebrates his life and legacy. Particularly for my children, who were young, or not even born when he passed a way it has given them a way to remember their Abuelito and understand death in a way that is not associated with fear, but rather as an extension of the spiritual realm. They find such solace in creating an altar in his honor every year. Furthermore, it has created an opportunity for my children and my family to reflect upon and honor all of our ancestors, a chance to share and listen to our family stories, to learn where we come from and take pride in who we are. May we all take this opportunity to connect to our ancestors, to our family histories, and to reflect on the cycle of life.